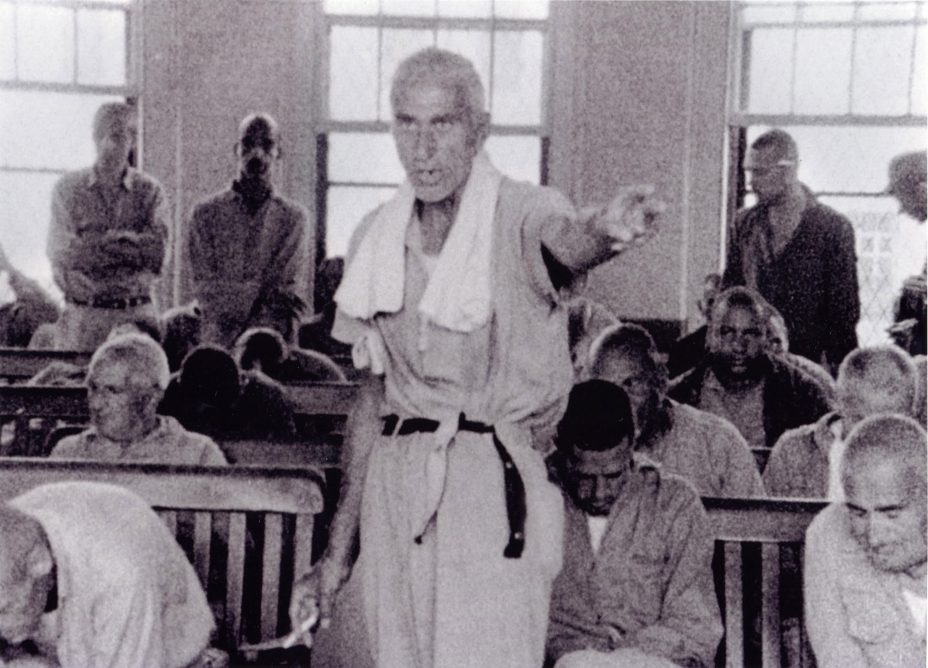 Titicut Follies is a 1967 American Direct Cinema documentary film directed by Frederick Wiseman and filmed by John Marshall. It deals with the patient-inmates of Bridgewater State Hospital for the criminally insane, a Massachusetts Correctional Institution in Bridgewater, Massachusetts. In 1967 the film won awards in Germany and Italy. Later on, Wiseman made a number of such films examining social institutions (e.g. hospitals, police, schools, etc.) in the United States. The title of the film is taken from a talent show put on by the inmates of the hospital, which was named after the Wampanoag name for the nearby Taunton River.

Just before the film was due to be shown at the 1967 New York Film Festival, the government of Massachusetts tried to get an injunction banning its release, claiming the film violated the patients’ privacy and dignity. Although Wiseman had received permission from all the people portrayed or the hospital superintendent (their legal guardian), Massachusetts claimed that this permission could not take the place of release forms from the inmates. It also claimed that Wiseman breached an “oral contract” giving the state government editorial control over the film.

A New York state court allowed the film to be shown, but in 1968 Massachusetts Superior Court judge Harry Kalus ordered the film to be recalled from distribution and all copies destroyed, citing the state’s concerns about violations of the patients’ privacy and dignity. Wiseman appealed to the Massachusetts Supreme Judicial Court, which in 1969 allowed it to be shown only to doctors, lawyers, judges, health-care professionals, social workers, and students in these and related fields. Wiseman appealed to the United States Supreme Court, which refused to hear the case.

Wiseman believes that the government of Massachusetts, concerned that the film portrayed a state institution in a bad light, intervened to protect its reputation. The state intervened after a social worker in Minnesota wrote to Massachusetts Governor John Volpe expressing shock at a scene involving a naked man being taunted by a guard. The dispute was the first known instance in American history of a film being banned from general distribution for reasons other than obscenity, immorality or national security. It was also the first time that Massachusetts recognized a right to privacy at the state level. Wiseman has said, “The obvious point that I was making was that the restriction of the court was a greater infringement of civil liberties than the film was an infringement on the liberties of the inmates.

Little changed until 1987, when the families of seven inmates who died at the hospital sued the hospital and state. Steven Schwartz represented one of the inmates. Schwartz’s client was “restrained for 2½ months and given six psychiatric drugs at vastly unsafe levels—choked to death because he could not swallow his food.”

Schwartz has said, “There is a direct connection between the decision not to show that film publicly and my client dying 20 years later, and a whole host of other people dying in between” and that “in the years since Mr. Wiseman made ‘Titicut Follies’, most of the nation’s big mental institutions have been closed or cut back by court orders.” In addition, “the film may have also influenced the closing of the institution featured in the film”.

In 1991, Superior Court Judge Andrew Meyer allowed the film to be released to the general public, saying that as time had passed, privacy concerns had become less important than First Amendment concerns. He also said that many of the former patients had died, so there was little risk of a violation of their dignity. The state Supreme Court ordered that “A brief explanation shall be included in the film that changes and improvements have taken place at Massachusetts Correctional Institution Bridgewater since 1966.”

The film was shown on PBS on September 4, 1992, its first and only US television airing. Before the film a narrative warning and an introduction by Charlie Rose were played. At the end the message stating improvements had been made was shown.